Technically, Zhang Jiwei is doing the same job his father, grandfather and great-grandfather did decades ago at Shanghai's port in loading and unloading cargo. But the big difference is that instead of using a single bamboo bar, Zhang has access to the world's most advanced fully-automated facilities.

"Since I was a little boy, I have been familiar with the equipment at the port, because every day my family discussed their work," said 36-year-old Zhang, whose family has seven members working there.

Like his father and grandparent, Zhang joined Shanghai International Port (Group) Co in 2004 as a gantry crane driver, loading and unloading rubber tires.

Zhang Dazhu, Zhang Jiwei's father, who started working as a port loader in 1978, said, "The workload has been cut greatly in recent decades thanks to large machines and automation technologies."

Zhang Dazhu remembers that there were very few cargo vessels with a capacity of more than 10,000 metric tons in the 1980s, and most of them were bulk carriers.

"Various divisions of the port took charge of different goods, ranging from sand, pebbles, cement, chemical fertilizer, to tangerines, grain and preserved pickles. Apart from the bamboo bar, my workmates and I also used our hands and shoulders to carry the goods. On summer days, carrying goods between the yards and the airtight ship made everybody sweat like bulls," he said.

Ding Songbing, general manager of the strategy and research department with Shanghai International Port (Group) Co, said, "Back in the 1970s, vessels had to queue in a long line to reach the yard because Shanghai port had very few berths and efficiency was low.'

Zhang Dazhu was not too keen on handling cement and fertilizers, which were packed in woven bags. The rough bags easily rubbed on his skin, and if the fertilizer spilled on the body, the smell remained even after several showers.

"There was basic machinery, but the majority of the work was done by human labor, not to mention the complexity and risk involved during this work," said Zhang Dazhu. 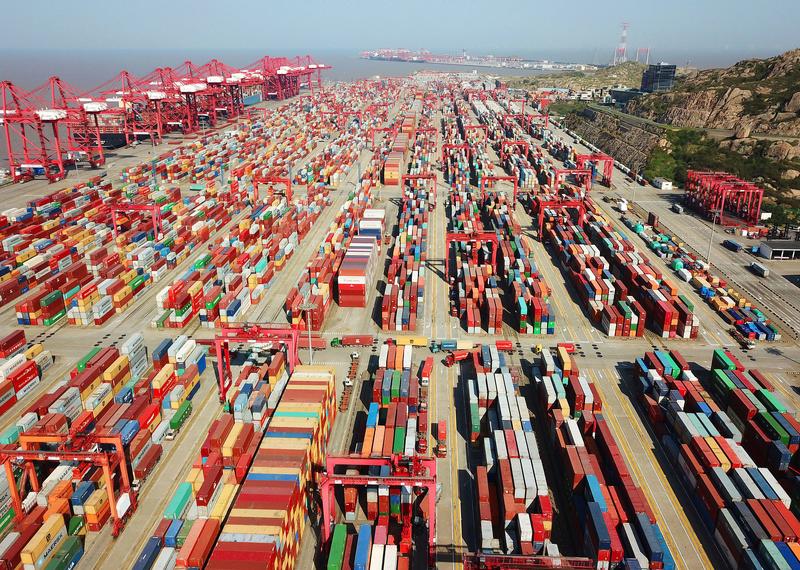 Ding said the situation improved as the port launched reforms and China's economy started to take off after the introduction of foreign capital.

The turning point came in December 1995, when the central government approved the development of Shanghai into an international shipping center, comprising the deep water port of Shanghai as the main port, along with ports in Zhejiang and Jiangsu provinces.

The decision led to the development of Pudong New Area in Shanghai and the Yangtze River economic belt.

At the time, Shanghai port mostly servFed as a link for importing finished goods and raw materials to meet national economic development targets, and it handled less than 2 percent of the global container volume.

Today, the Yangtze River Delta region is home to five of the world's top 100 container ports, and Shanghai International Port Group and the newly integrated Ningbo Zhoushan Port Group run the largest and fourth-largest container ports in the world respectively. Last year, these two ports handled 12 percent of the volume of the top 100 ports globally.

This success comes as China celebrates National Maritime Day on July 11, marking the first voyage of Zheng He, the Ming Dynasty (1368-1644) navigator. Zheng made seven voyages to show China's might to the rest of the world.

Ding said, "It's worth noting that the leadership of Shanghai port recognized the trend for container shipping, and accelerated the construction of deep-water container shipping ports between 1997 and 2008 to expand its capacity.

During this period, Shanghai port saw its capacity increase from 1.2 million TEUs (Twenty-foot equivalent units) in 1994 to 11.28 million in 2003.

Zhou Dequan, a research director from the Shanghai International Shipping Institute, said, "Shanghai has few stretches of deep-water coast, and thanks to the proactive measures adopted by the central government and Shanghai municipality, Yangshan Deep-Water Port for container ships in Hangzhou Bay, south of Shanghai, was established. The port infrastructure ensured Shanghai's rapid development into the world's largest container port." 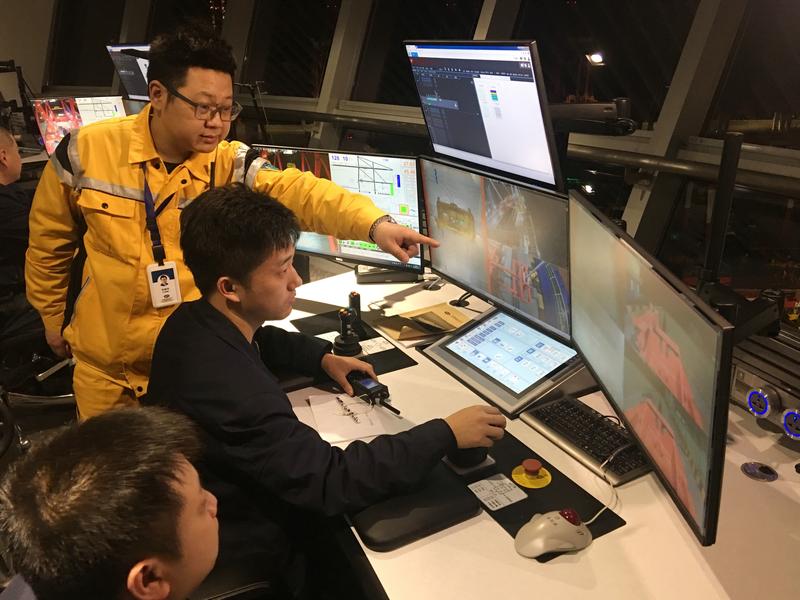 Since China joined the World Trade Organization in 2001, the country has become the world's manufacturing center with significant export growth. The port of Shanghai has also ridden China's economic boom by shipping Chinese-manufactured products globally.

Zhang Jiwei said: "Having heard so much about working in the port, I finally became part of it myself in 2004. My father taught me the working procedures of being a port loader. My grandpa stressed the importance of hard work, and grandma provided lots of tips on loading and unloading different cargo".

Zhang Jiwei was luckier than the older members of his family, because as a crane driver he did not need to handle bulk cargo with manpower. All he needed to do was to control the gantry crane to lift a container to or from a truck each time.

"I was really shocked when I first arrived at the Guandong yard in Yangshan. There were 50-odd cranes on the quay, looking like a forest of steel. My previous work experience laid a solid foundation for me to become a crane driver there in 2008," he said.

Unlike his father, Zhang Jiwei does not sweat at work, but faces more pressure because he has to control the crane to load and unload containers steadily, accurately and quickly.

During peak times, he can load 90 TEUs an hour into container ships. He works more than 10 hours each shift.

The efforts of Zhang Jiwei and his workmates helped the Port of Shanghai to surpass Singapore to become the world's largest container port in 2010. A total of 40.23 million TEUs were handled by the Shanghai port last year.

Zhou said, "The State Council's decision to develop Shanghai into an international center of finance and shipping as a national strategy in 2009 and to set up the China (Shanghai) Pilot Free Trade Zone in 2013 have paved the way for Shanghai's shipping center development with favorable policies."

Last year, Zhang Jiwei became a safety inspector at the fully automated container terminal, or the fourth phase of the Yangshan Port project, which is also the largest automated port worldwide.

"I was totally astonished by the high efficiency and automation of the terminal. Unlike traditional ports that are noisy, dirty and crowded, nobody can be seen at the terminal, and all the vehicles and machines work by themselves," he said.

He works in a control room with six screens providing information and data on the six rail-mounted gantry cranes. By using two levers on the control desk, Zhang can deal with all the cranes at the same time.

What he is now experiencing is probably just the beginning, as Shanghai's port is seeking to increase efficiency on its way to becoming an international shipping center.

Ding, from the Shanghai International Port (Group) Co, said, "About 70 percent of our port stevedoring business comes from containers, and the proportion will continue to grow to up to 80 percent in the coming five years due to soaring container shipping as well as China's demand for cargo imports.

"The trend of manufacturing is shifting from the coastal areas to inner cities along the Yangtze River to save costs, which also requires port operators to create a definitive service system. Container shipping, due to its steady delivery schedule and low costs, will continue to be a prime choice for cargo shipping.".

He said the cost of shipping containers by sea is 20 percent the cost of transporting them by road and one-third that of rail costs.

Meanwhile, Zhang Jiwei is planning a family trip to the automated terminal next year with his parents, his grandparents and his 10-year-old son so they can see what port loading work looks like now.

"It's special that we have all made contributions to the development of Shanghai as an international shipping center," he said.

Previous:Deleveraging Efforts At Central SOEs Gather Speed Next:The Ministry Of Ecology And Environment Will Publish A List Of Harmful Atmospheric Pollutants Before The End Of The Year